Thursday was the big day. I became Israeli. The day was slated to be a busy one. As I mentioned, my who cousin was coming in from America was bringing with him some important documents including my birth certificate to present at my meeting. He was arriving at 11:30 am. My plan was to borrow my sister’s car, drive to the airport, meet him and take him to Tel Aviv and then head back to Jerusalem for my 1:30 meeting. It was an ambitious schedule.
I set out of my apartment later than I had planned and decided 'today I am becoming Israeli I am not going to take a cab to my sister’s office – I am not even going to take a bus. No I am going to take a tremp (hitchhike).'
I set out to find my tremp. On the way to the main street I saw a woman getting into her car. She did not know me but we happen to be neighbors – she lives half way down my block. I asked her if she was heading to the exit of the city. Unfortunately she was not. I told myself that otherwise she’d definitely have taken me. Once I got to the main street right by the bus stop, I started looking for a ride, but realized soon after that I was behind schedule. I called an audible, gave in and decided to take a cab. In neighborly spirit, I turned to the people at the bus stop and in Hebrew asked if anyone needed to go towards the exit of the city as I was taking a cab in that direction and would love to give people rides. I was surprised that I got a bunch of blank stares since the bus they were waiting for goes in the direction my cab was headed. There was one American student who took me up on my offer and asked if I was passing the market. I brought him with. On the way we were chatting about how he is planning on moving to Israel and serving in the army. His brothers and sister also lived here. As he was getting out of the car, I asked him his name. when he told me I asked “as in Chaim XXXX” to which he responded “he is my brother.” Small world. I am staying at Chaim XXXX’s place this Thursday in Tel Aviv before the Tel Aviv Half Marathon.
I took the cab to Har Hamnuchot, which is a cemetery that covers literally an entire mountain. My grandparents are buried there. Although they never lived in Israel, my grandparents saw an importance to being laid to rest in Israel. After paying them a visit , I walked across the street and up the hill to my sister’s office (not on the cemetery mountain but really close). I took the keys and headed for the airport. When I met up with my cousin he told me that a car had been sent to take him to Tel Aviv so he did not need a ride. This was a huge help for me – I could now make it back to Yerushalayim with time to spare. I figured I’d go pick up Aviva.
Aviva is a good friend of mine here in Israel. We met through her sister who emailed me a few weeks after I had arrived telling me to look out for her sister who was moving to Israel for 6 months. Aviva was able to set up a similar arrangement to my own in that she is working part time for her consulting company in the States. We quickly became good friends and are now very close. When I told Aviva the day before that I was making Aliyah on Wednesday she immediately told me she was coming with to document the momentous event. Despite my assertion that the whole thing would be a bore, she was insistent. I’m glad she was. 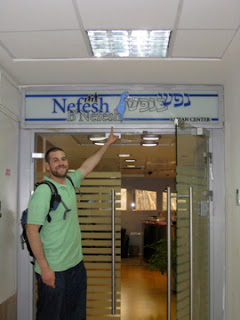 I swung by and picked her up and we headed to the Nefesh B’Nefesh offices. All of the meetings for people making Aliyah on that day had been scheduled between 9 and 1:30 pm. I was given the last slot since I needed to get my papers. I arrived at NBN about 15-20 minutes late and everyone was gone except the Misrad Hapenim people and the NBN employees – i.e. no other new immigrants were there. I was rushed into the board room where the Misrad Hapenim people were set up. The process was very simple and anti-climactic. They asked to see my birth certificate, letter from my rabbi and letter from a lawyer attesting that I am of good legal standing (that cost 10 shekel and was completely pointless). They also took my passport (I’m told I get it back in a week with my new Israeli ID… I hope so. In the meantime, I am also hoping I am not accused of assassinating a terrorist in Dubai).
Lastly, I was handed a form that had been filled out for me (really nice) and told to sign in two places. I signed the form, handed it back and that was it... I had made Aliyah. 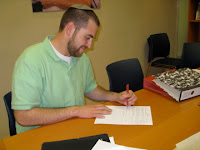 I looked at Aviva and said “well that was anti-climactic.” Suddenly, Aviva reaches into her bag and boom – she pulls out these great sings that she had made in honor of my Aliyah. She started singing “Aliyah songs,” which was ironic because she had not seen my blog post from the night before (although several people at NBN had).
﻿﻿ 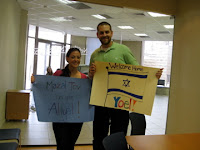 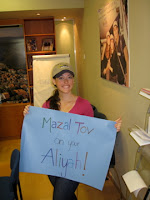 We went around the office taking Aliyah pictures with people that we knew and didn’t know.
﻿
﻿
﻿﻿
﻿﻿﻿


The best pictures we took were with a “group flight” poster. A group flight is a scheduled NBN flight from outside of Israel in which a large group of Olim (new immigrants) come to Israel at one time. As a group if you will (see last post video “Come Back” by the Moshav Band). There was a picture on the wall of this flight and since I am making Aliyah from within Israel, I missed out on the opportunity to be on a group flight (something I had always wanted to do). To make up for it, we took the following pictures: 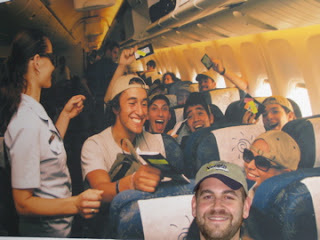 The 2nd picture was so convincing that later that night a guy who saw the picture looked at me confused and said “I don’t get it. I know you live here and made Aliyah today – when were you on a group flight.” Aviva took a Photoshop quality picture. Here are some other pictures from my Aliyah extravaganza. The Misrad Hapenim women saw how into the event I was and she gave me an NBN hat… so cool. With the had I had the perfect I just made Aliyah accessory. 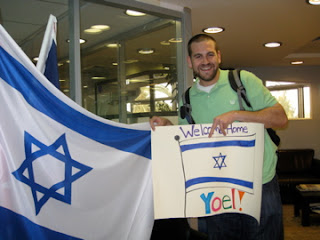 ﻿﻿
﻿﻿We left the NBN office and I dropped Aviva off at the supermarket and went to run errands. The previous week, before I knew I would have my Aliyah appointment, Groopbuy – a daily deal site similar to Groupon – had a coupon on sale to River Noodle Bar, an Asian noodle (duh) and sushi restaurant. This was the second time they had such a deal.

Last time they offered the coupon, I went there with three friends for dinner. We had a great time – the food was delicious and the sake bombs were loads of fun… that’s right we sake bombed. Until recently, I thought we were the first people in Israel to ever sake bomb – I later discovered we were not – but we were the first at Rive Noodle Bar (as far as I know).
At any rate, when I saw the deal online, I decided it was a great excuse to plan a group outing. I sent an email to a few friends with the plan that we would buy coupons in groups of 2 (coupons were 100 shekel for 50 shekel good for 2 diners). We ended up with a group of about 12 coming and I reserved “the big table in the corner” which was by far the coolest and nicest spot in the place.
One the way to the restaurant I made a stop at a t-shirt store and I purchased what I thought/think is a brilliant t-shirt: 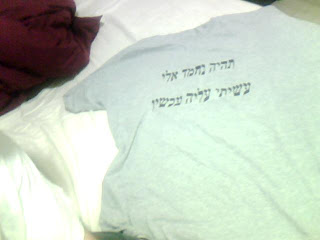 The shirt says “תהיה נחמד אלי עשיתי עליה עכשיו” which translates to “Be nice to me I just made Aliyah”. And for my Aliyah buddy, I got a shirt that said “אני איתו” – “I am with him.” Decked out in out new Aliyah gear, the stage was set for a great night, and that is exactly what it was. 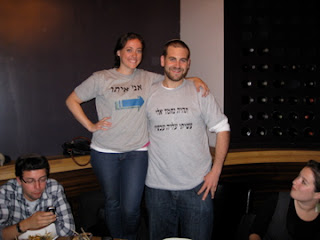 ﻿﻿
Our dinner for twelve blew up to somewhere near 20. The other restaurant patrons were not amused by our sake shenanigans, but we had a hella good time. 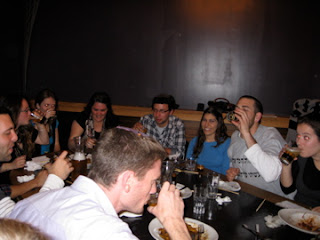 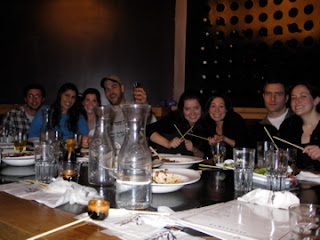 After sake bombing, the plan was to go sing Karaoke at Capricorn, a bar in town. When we got there though, the place was way to full and we couldn’t get in. We defaulted to Lagos, an African restaurant during the day and very spacious – well decorated bar at night. We hung out and danced at Lagos (although many of our group complained that the music was not good).
Also on a fun and anecdotal note, I shaved my beard last night. It was motivated partially by a comment that I made in carpool that I look like an 11 year old boy without a beard, combined with the fact that I like to take it off once a year to make sure I still like it (I do), to run the half marathon in Tel Aviv clean faced (it feels nice) and to prepare for sfira – the time after Passover when we are supposed to not shave for just over a month.All in all, Thursday was a joyous, memorable and all around unbelievable day. I am really happy with my decision to make Aliyah and want to thank everyone here for their support and good wishes. 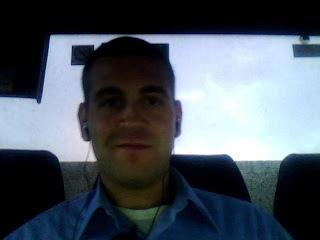