They say “the third time is a charm.” This past weekend, that saying proved true, as I finally got to go camping for Shabbat. The story starts back in September/October, when Ariel sent out an email asking if people were interested in going camping for a weekend. This was not the first time Ariel had coordinated a camping weekend, and I was really excited about it. Unfortunately, not enough others were. The weekend was called off due to lack of interest. The winter past, and again in April, Ariel sent out the “who is interested” email. This time, there was rampant interest, and I figured the plan was a certain go. Unfortunately, unseasonal rains called off our plans.

The week after the second camping trip was called off; I traveled to America for a week and then returned to Israel as a Birthright leader – touring the country with 40 awesome 22-26 year old Jewish Americans who had never been on a trip to Israel. I could write a whole blog (maybe should have) on the experience, but will instead just say that it was an unbelievable experience that strengthened my love and connection to Israel. I told Ariel that the week I returned I wanted to go camping. Although I pushed it off one week more, under Ariel’s guidance, I put together an awesome camping trip this past Shabbat.
23 of us set out to Sataf, a natural park/nice woodsy area on the outskirts of Jerusalem. We arrived Friday afternoon, and as soon as we reached the camp site, we were off to work. I started grilling dinner as others set up the campfire, collected wood, pitched tents, hung lanterns and set up the eruv (boundary that defines the area in which one can carry over Shabbat). Also see here: The Daily Show: The Thin Jew Line.
Cooking, gathering wood, setting up hammockville, and enjoying a cold one.
It was a surprisingly lot of work to set up the whole camp site, but the efforts were worthwhile. We spent Shabbat feasting on barbeque, lounging in hammocks, drinking wine, playing Monopoly Deal and Taboo, reading, discussing current events and enjoying each other’s company.
I had been wanting for some time to purchase a poyke – a large cast iron pot (think witches cauldron) which you place into a bonfire or on coals to make really yummy soup/stew, or so I had heard. Ariel sent me a deal for a poyke online, and I jumped at the chance to pick it up before camping. I was super excited for the poyke, and while I had spoken to many people about what goes into the poyke, I didn’t have an official recipe or any idea how much contents I could/should put into my poyke. If you have ever had my soups, you know that I like a hearty soup. I figured my poyke would be no different. I threw in a kilo of meat, kilo of chicken, beans, rice, barley, lentils, onions, chick peas, wine, beer, coke, garlic… it was set for glory. We even went so far as to start the fire before Shabbat to make sure the poyke got cooked in time for dinner. Unfortunately, my over ambition got the best of the pot, as I checked the stew about an hour after it was put on the fire, and the whole pot had burned. It reeked and was entirely inedible.
So there we were – less than an hour before Shabbat, and a poyke in shambles. I am not sure who had the idea to try it again, but we did just that. Although at that point all the meat had been cooked (or burned in the pot), we had other leftover ingredients. As a group, a few of us banded together to have a second go at the pot. Frumie started chopping vegis as Aviva, Jeremy, Chaim and I worked on scooping out the burnt stew and prepping the pot for a second go and re-arranging the fire to set more idea simmering conditions (we had the pot right in the fire the first time). Aviva also noted that the stew initially did not have enough liquid – a condition we made sure to fix the second time around. With a lot of monitoring and a little coaxing, the second round of poyke came out great, and we all enjoyed bowls of onion, rice, lentil, pea, potato and sweet potato soup with a slight hint of sweetness from the coke put into the pot for some extra flavor.


Second time around, the poyke was delicious
We left the camp site Saturday night after an really nice, both relaxing and tiring weekend smelling like smoke from the second bonfire we made and full of roasted marshmallows. Camping was all in all a fun time that required some planning before hand, and a lot of work to put together at the campsite. A special thanks must be given to Ariel I for helping and guiding all the planning – without her, camping would have been a jumble of “we should have brought/thought of/considered...” Ariel thought of it all. She rocks. 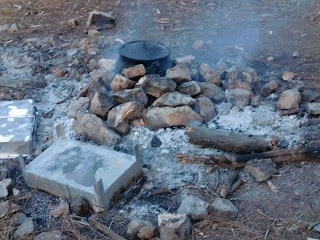 Posted by Oracle of Jerusalem at 2:04 PM