Getting Ramat Gan/Tel Aviv in Before It’s Too Far

As I have mentioned in previous posts, I have been staying with my sister and brother-in-law for the past three weeks during the middle of the week when I am working. Their apartment is in Ramat Gan, which is the same city as the office. The commute from Rachel and Itay’s was 25 minutes instead of about and hour and a half. Alas and hooray, they are moving to Jerusalem on Sunday. On Monday night, Rachel, Itay and I set out to take advantage of the benefits of their apartments location before they moved. I left work at 6:30, walked 2 blocks and hoped on the 66 bus. 25 minutes later I de-bused at Allenby Street in Tel Aviv… across the street from the famous and beautiful Tel Aviv beach.


I arrived as the sun was setting over the water – it was nice, but unfortunately the clouds blocked out a good chunk of the Sun. 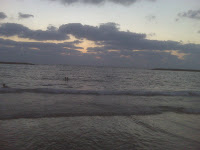 Clouds or no clouds, it was about 27 – 30 C (80-86 F for you American readers out there). I changed into my bathing suit and just then Chel and Itay arrived to the beach. We went for a swim and the water was amazingly warm. It felt warmer in the water than outside. Once the sun was gone and it was getting dark, we dried off and Itay broke out his Pakal Cafe (camping stove) which he uses to make coffee. The Pakal was a huge hit on our family hike last year when my siblings and I hiked across the northern part of Israel from the Mediterranean Sea to the Kineret while on vacation. It was a great time. 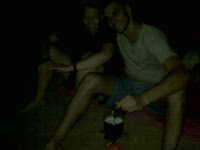 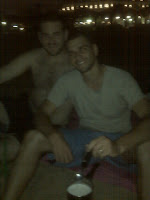 We made coffee on the beach and enjoyed it with the best cookies known to man kind, Tim Tams. Tim Tams deserve a blog post of their own and I probably will make one. I’ll wait for a point where I have nothing worth writing about. The short on Tim Tams is that they are these imported Australian cookies, as far as I know they are not yet in the States, on their own, they are a formidable, delicious chocolaty treat. But pair them with coffee and eat them the “proper” way, as I was taught by Rachel and Itay, and you have hands down one of the best baked goods that has ever graced this planet. After we finished coffee, we headed home to shower, but our night did not stop there…

Rachel had for months from her friends at Bar Ilan (www.biu.ac.il) about a really cool brewery near school that she had not had a chance to try out. So after showering, off we went to Jems Beer Factory (www.jems.co.il). Jems was quite the gem (yes I just did that). The brewery was opened about a year and a half ago by an American from DC who moved to Israel. 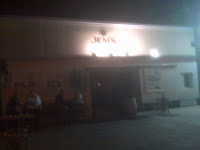 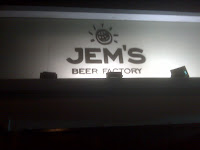 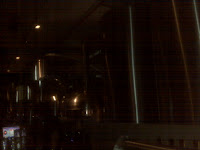 Israel’s beer market leaves what to be desired; however, slowly but surely, pubs and breweries have been opening up (www.dancingcamel.com) that have added variety and quality to the traditional options of Maccabbi, Carlsberg and Tuborg. Jems was located in an industrial area and was housed in converted warehouse. Outside in the courtyard, there was a basketball court where patrons can shoot around, as well as some tables for enjoying a beer in the warm Givat Shmuel (across the road from Ramat Gan) night. Inside the place was really cool as well – awesome decor, lighting and music. The food was really cool with a unique menu; we had spicy sausage and smoked chicken wings. Oh and the beer, really good too. We had their stout and their special Belgian Ale (my favorite kind of beer). The Stout was okay – felt like it could have used a bit more, but it was very smooth and surprisingly light for such a dark beer. The Belgian Ale was really good, right on the money. It really brought me back to the time I spent in Brussels (two weeks earlier). All in all, Jems was really cool and good. If you are in the neighborhood, you should check it out. Sorry for turning this part of my blog into Yelp.com.

On our way out the bar, in classic Israel form, Itay ran into a friend from high school, Adam, who was living in the area. Adam was leaving the same time as we were and he gave us a ride home. After a day at work, a swim at the beach, coffee, a shower, dinner and beers, Yoel was a tired little kid. I fell asleep on the short ride home. Itay carried me upstairs, okay not really, and my siblings tucked me into bed. I’d say we made the most of one of the last nights we had access to Chel and Itay’s apartment in Ramat Gan.

I wrote the post above on the bus home tonight. As I am posting this I just heard news of a terrorist attack in Israel and want to put it here to share with you. It is stark - here I am having a great time, having just come back from dinner with my cousin and we heard the news in the article below. There is happiness and tragedy here all at once. http://www.ynetnews.com/articles/0,7340,L-3947089,00.html
Posted by Oracle of Jerusalem at 11:51 AM