My Trip to Israel

The trip over to Israel was a great experience. I flew to TLV via Brussels on Jet Airways, an Indian based airline with a hub in the Belgium capital. I was very happy with Jet Airways. Upon check in, the ticket agent paid no heed to the fact that both of my bags were grossly over the weight limits, which was a really big relief. Per the rules on their web site, I was in for some massive fees. I was also seated in an emergency exit seat without having to request it, which is huge for a 6’5” guy like me.
On the flight to Belgium, I was seated next to a soldier named Tim from Northern Colorado. Over our 7 hour flight, I learned more about Tim than I know about a lot of friends. He was a very open and friendly guy, and it was a unique experience to sit and speak with a member of our armed services who has served for 8 years and done 4 rotations through Afghanistan. Tim broke and dislocated his shoulder jumping from a helicopter in March and was on his way back from a month of leave he was given to recover from his surgery. This had been his second serious injury in the Army. When I thanked him for his service, he really thought nothing of it.
Once we landed, I said my goodbyes to Tim and went on my way to see Brussels in my 10 hours layover. I took a train to the center of the city and walked all over the city. Highlights included:
·         I took the train to the central station and walked all over from there. I saw the city’s cathedral and then walked down Rue Royal Koningsstraat down to Place Poelaertplein – a court house. It had free wifi and was grandiose. 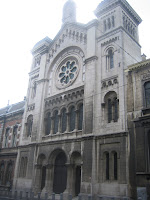 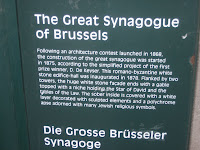 ·         From there I went to the European Union campus – the buildings that house the EU. Unfortunately I did not have time for the tour. The buildings were massive and very futuristic looking. 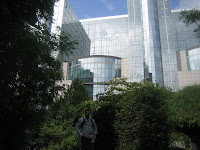 ·         I walked through a nice park to the Musee de l'armee et d'hostoire militaire. Which was a museum and a monument. 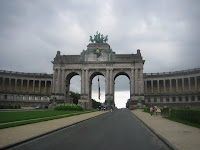 ·         I took a train back to the center and went to the Grand Place, a really beautiful bustling square with chocolate shops, bars and really nice architecture. A lot to take in. It was one of the few parts of the city what was actually bustling. Overall, Brussels was a really calm place – it was like a serene city. 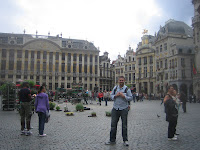 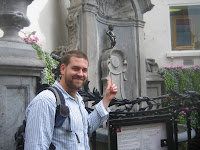 ·         I walked all around the upscale shopping area and narrow roads with cool different restaurants.
·         Of course I also made sure to have a few Belgium beers at different bars and pubs. I discovered a delicious beer called Kwak that was just so good. I also had some Belgium chocolate. How could I not?
Upon my arrival in Tel Aviv, I was surprised by my sister and brother-in-law, Rachel and Itay at the airport. They told me they were going to bed and jumped me as I cleared customs. It was a great surprise.
Posted by Oracle of Jerusalem at 2:14 PM