For almost three months, my friend Lisa and I wanted to plan a trip to Eilat, the southernmost city in Israel (see last post). Finally last weekend, we got it together. We picked last weekend because Lisa’s roommate, Shira, and our friend Ariel were planning a trip and we thought we’d tag along. We recruited Lisa’s friends Yair and Melissa to join us and were planning on staying with Shira’s group at their hotel Agamim. That plan soon fell apart when we found out the price (about 700 shekel per person for the hotel), which was a bit high for our group. Luckily, I took my sister’s advice and called Itay’s (my brother-in-law) cousin Emmanuel.

Let me just say, Emmanuel is the man. He is the guy you call when you have any questions about anything – he knows where to get the best deals, software, knows everything about cell phones and technology (he is in a special engineering program in the army). In ten minutes after talking, Emmanuel had found us an awesome deal. He found us a “4 Star” all-inclusive hotel with food and alcohol for Thursday and Friday night for 470 shekel (~$130)! We also discovered later that our friend Aliza and her sister Ilana were coincidentally staying at our hotel.

Rachel and Itay lent me their car (my sister and brother are awesome) and we were on our way. The drive down was pretty nuts – we went from the heights of Jerusalem to the Dead Sea – the lowest point on earth – and made a right down to the south through the Negev desert. The drive was all down one lane highways (one lane in each direction) that wind around mountains and go over hills. Whenever we were driving behind a truck, I had to go into the oncoming lane and pass them.

Our 4 Star hotel turned out (unsurprisingly) to not be the nicest of places – the shower just had a soap dispenser on the wall, we may have found an egg shell in a breakfast dish and the wine they served came from a tap – but for the price we paid, it was perfect and what I expected. We dropped off out stuff and hungrily headed to our delicious dinner. After dinner we headed to the hotel girl’s hotel (they booked in one nearby because ours was full-but we worked out with the hotel so they could eat at our hotel), and we went out. 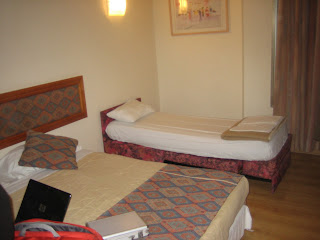 We found our way to the promenade that runs along the beach and went to a popular Eilat nightspot called the Three Monkeys. 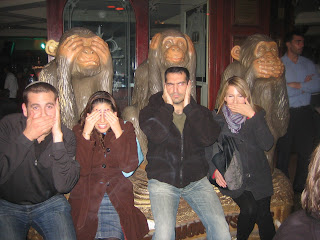 The Three Monkeys has an awesome live band and a great atmosphere. As we got in and made our way to a table, the crowd was boogying to Bee Gee’s hits. The music selection combined fun hits of the 70’s, 80’s, 90’s and today (I know it sounds like a radio station). Here are a few clips from the place – the keyboardist was really talented – she played keyboard, flute and saxophone – during “Tequila,” she walked around the bar playing the sax.

No one sings along to this one like the Jews... Mazal tov
After the Three Monkeys we headed to Paddy’s based on what seemed to be outdated advice. A friend assured me that it was a great spot, but it was a ghost town, a shell of what could have been a great place. If you go to Eilat, skip Paddy’s. We also saw a bar that seemed to market itself to children – thought that was funny.
The next morning I headed out to scuba dive. I have been a certified diver for about 6 years now, but have not had the chance to dive for the last 3. My last dive was in January of 2008. I was really excited to get back in the water.
In Israel, there are certain things that are way over regulated– while other things are completely unwatched. For instance, a child can go to a corner shop, pick up a bottle of vodka and some cigarettes and go light a bonfire pretty much wherever they want; however when a certified diver wants to go for a swim and hasn’t in 6 months, he needs to take a refresher course, prove all of his skills, and buy insurance – all things that are not required anywhere else I have dived. Now on the one hand, I hadn’t dived in 3 years and it was good to get back to it safely with a little refresher – but on the other hand, it was annoying that I could not just hop to it. I now need to dive every 6 months or will be required to re-take another refresher which took a good chunk of time and money – I look at this as an opportunity to dive more often – since I bought a year-long diving insurance policy and paid for the refresher dive, diving next time will be much cheaper.
After the refresher dive which was a fun time filled with a lot of annoying chores – take off your mask and put it back on, take out your regulator (air hose) and find it two different ways, simulate being out of air and practice breathing from the other guys extra regulator... After the skills section was done, we swam around a bit and saw some fish. I then started a course to learn how to use an underwater scooter – think Navy Seals approaching Alcatraz in “The Rock”.
The course was all of a 15 minute explanation of the risks of using an underwater scooter – they exacerbate some of the dangers of diving. After the short tutorial, it was back in the water to test more skills and go over what we had just spoken about on the surface. The scooter is awesome – it not only lets you save a ton of air by not having to kick through the water, but it really makes you feel like a fish. I moved much faster than any diver could kick and was shooting through the water effortlessly. After we reviewed the skills and safety points, we played around in the water doing loops and corkscrews like scuba acrobats.
Finally after two skills focused dives we were set for the totally fun dedicated dive. We got in the dive shops van with all out gear and drove a few kilometers away to the Israel-Egypt border – we were less than 100 yards away. We put on our gear and headed into the sea. Another awesome thing about the scooter is that you can cover a dignificant distance. We ziged and zaged between reef formations for over a kilometer of shoreline. On the dive we saw schools of fish, clown fish, blues, reds yellows and purples that you only see underwater, swam through a reef overhang, saw eels and a ray. The scooter went so fast that at one point I actually hit a fish – unintentionally of course. I have never been able to come that close to a fish – they are usually good at getting out of the way and avoiding my attempts at touching them… come on who wouldn’t want to pet a fish? This one may have been spacing out and I hit him with the scooter and my hand – don’t worry, he was okay. I quickly apologized and was one my way. The second dive marked the completion of my course and I am now certified to rent an underwater scooter and conquer the water – I definitely plan on scooting again.
I got back to the hotel and Shabbat started. Shabbat was very relaxing – we ate a ton, played board games, and relaxed in the sun next to the pool. Saturday afternoon, we headed over to Ariel and Shira’s hotel and hung out on their poolside patio. We ushered out Shabbat singing Shabbat songs as the sun set. After Shabbat, we headed back to our hotel and drove back to Jerusalem. We made great time on the way back – 3:10. Eilat was a great time and I am looking forward to going back soon.
Posted by Oracle of Jerusalem at 1:56 PM