This post picks up right where the last one left off. The day I got back from Eilat (Sunday the 9th) I began to have stomach aches after I ate. I was not cognizant that they were recurring – especially after peanut butter – until about Thursday. That morning, after having a few cookies at my Hebrew class’ breakfast party my stomach was really bad, so I called Dr. Dad. When I describe my symptoms to him, he said that it sounded like it could be a gallbladder issue – by virtue of the fact that stomach aches were onset by fatty foods. Gallbladder stones or a malfunctioning gallbladder often requires surgery. My sister made me a doctor appointment for later that day. My mother had coincidentally arrived in Israel the night before (Wednesday) for a visit and a family friend’s daughter’s wedding. So together with my mom, sister nad brother-in-law I headed to the doctor’s office.

I had health insurance from Hebrew U and although my policy expired at the end of the semster, I got some good usage in beforehand. I was pleased to find that my health insurance provider, Harel, paid for all of my doctor visits, prescriptions and other medical costs.

I was very impressed with the medical care that I received. I went to the Wolfson Medical Center in Jerusalem and met with Dr. Jonty Maresky, who is also the team doctor for Hapoel Jerusalem, the city’s basketball team and founder of the Wolfson Medical Center. He recommended me for an ultrasound to check my gallbladder and gave me a medication to take in case of very bad stomach pains. All weekend my mother was encouraging me to take the stomach medicine, but I insisted on only taking it if I was in serious pain. Finally on Monday night, I caved – my stomach was hurting and I took the pill. To my chagrin, it did not alleviate the pain.

An interesting aspect of the Israeli medical system is that when a doctor prescribes a treatment or prescription, the insurance company needs to approve it before it is paid for.

On Tuesday morning I went for my ultrasound – since the insurance company generally takes several days to approve treatments such as ultrasounds, I decided to go for the test privately – the doctor told me it would cost ~300 NIS ($80). When I arrived for my appointment, the desk receptionist told me that my insurance had not yet sent approval and asked if I wanted to call my insurance company and see if they’d approve it. Surprisingly, the insurance company approved it on the spot. The ultrasound technician asked me if it was my first (it was). I asked her the same… it wasn't. The ultrasound showed that all signs were clear so I headed back to the doctor (with my mommy of course) to see what the next move was. The doctor recommended that I may have a parasite – apparently a common issue in Israel. He prescribed me a medication for parasite treatment, and told me that if I was not feeling better by Thursday I should get a blood test. I took the medication – four pills that Tuesday night and four to follow the next week if I was feeling all better. The next morning I woke up feeling good and did not eat a lot all day. It was not until I met my mom and family late at a cafe on Wednesday night coming straight from work and arriving for desert that I actually put my parasite diagnosis to the test. In the middle of the night at about 2:30 am, I awoke to the worst stomach pains I had experienced yet. The following day I ate very little and on Thursday morning I headed back to the doctor’s office for the blood test. I was told that the blood test generally takes four to five days for insurance approval. At that point, I had been having stomach aches for a week and I was not about to wait for my insurance to approve my blood test. The blood test lab offered to take my credit card and hold it until the insurance company accepted or denied the charge, which was about 400 shekel. I signed on the line and they took my blood.

That afternoon, the blood tests came back with all clear results, and amazingly enough, the lab called my insurance and the tests we approved on the same day! During this whole treatment process, I had been consulting and conferring with my father on my condition. He spoke to some of his associates and thought it might be an ulcer. I spoke to Dr. Maresky and he agreed with the possibility. So, Thursday afternoon, I got my third prescription for a proton pump inhibitor (PPI) – think strong Zantac. Friday morning I took my first dose and thank G-d since then my stomach pains have been minimal. The doctor said that an ulcer occurrence in a gut in his twenties is usually caused by bacteria that my body should be able to fight away as the PPI keeps it in check. 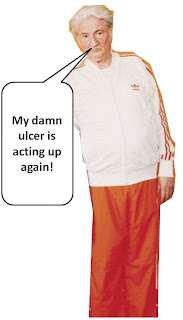 When we found out it was an ulcer, I was relieved to not need surgery and was kind of excited about being able to say things like “my ulcer’s acting up” and “hearing you say these things is not good for my ulcer.” Of course in both circumstances I say is like an 80 year old Miami man in a track suit – pronounced: “Ulssa” with a heavy New York accent.
In searching for a clip of an old man saying “ulssa,” I came across the following video – I had to put it on after I saw it – this woman had very similar situation to my own, only she unfortunately had her gallbladder removed before they figured out what was wrong with her. All that is discussed in the first minute or so of the clip. At that point, she begins sharing information that I would consider far too personal to be shared on youtube. However, since I am unable to cut out the second half of the clip, here is the whole thing. Listening to it makes me wonder if I ever share just a bit too much. If that is/were ever the case, I hope someone out there will let me know.

Despite my medical misadventures, I had a really nice time with my mother on her visit. She has infinite energy and kept my sister, brother-in-law and I running to keep up. We spent a great day in Tel Aviv. We went to an art fair, walked on the beach and went grocery shopping at an amazing supermarket (it’s all about the little things). I also did not eat a meal at my apartment except for Shabbat. On Shabbat I hosted a large dinner so my mom could meet some friends. The meal had a theme - finger food. Everything had to be eaten by hand our with the toothpick set at everyone's seat. The menu included soup (served in a cup), seasame chicken, chicken wings, Moroccan cigars, mini carrot muffins, stuffed grape leaves, edamame, mini deli wraps, salami in pitas, chocolate balls and brownies and other yummy hand eaten foods. Between not running due to stomach pain and eating out a bunch, marathon training has hit a hump. I now need to get back on the running horse - unfortunately. the Jerusalem Marathon might not be in the cards.
Posted by Oracle of Jerusalem at 1:23 PM