A Day at Counter Terrorist School

A year and a half ago, my father booked a ticket to attend a medical training conference in Israel. The conference was cancelled, and as a result, he cancelled his ticket and received a credit. That credit was set to expire at the end of this month. As a result, my dad chose to use it rather than lose it and he came to Israel last Tuesday for a weeklong visit. His trip has thus-far been really nice and I have been lucky to have both of my parents visit within a 2 month span.
On Thursday, my dad, brother-in-law and I set out for a special guys day to the Gush Etzion area, near Efrat (where my cousins live), for a private class in counter terrorism at Caliber 3 http://www.caliber3range.com. Caliber 3 is an internationally renowned counter terrorist training facility. The clientele varies greatly – the facility trains Israeli and foreign special forces (the British SAS –British Special Forces – was there the week before us) as well as police units, Community Guard Organizations (more on this below), regular shooting range customers and tourists. Caliber 3 teaches a range of information from krav maga – Israeli martial arts to best practices and techniques in weapons and counter terrorist operations.
My dad and I heard about Caliber 3 from my brother-in-law, Itay, who after the army (he was a special forces Krav Maga and weapons instructor), interviewed for and was offered a job as an instructor at the facility. Upon our arrival, the place did not look like much. It was down a deserted road about 10 minutes past Efrat. We checked in at the office which was build into one of several shipping containers converted into offices, and we headed out to meet our instructor.
Steve, our South African instructor informed us that he moved to Israel over 10 years ago, served in the army in the Golani Infantry division, and now lives in Efrat, where he is a member of the Community Guard Organization (CGO). Efrat is located beyond the “Green Line” in what is often referred to as the West Bank Settlements. It is a town of ~10,000 on top of a hill. The town has grown over the years and is a really peaceful place with a simple community. Two of my father’s first cousins live in Efrat with their families – we stayed with one of them last week. In the past, there have been terrorist attacks on the citizens of – they have thank G-d been infrequent, but have also in the past been deadly. The town is surrounded with a high tech fence that notifies a control center if anyone has breached the fence. In such a case, the CGO is called and Steve and the other members scramble to the scene to protect the community. Again, while these attacks do not happen on any regular basis, the precautions still must be made.
We started our training in discussing the importance and focus on counter terrorism. How Israel and Caliber 3 have become experts in the field, not by choice, but by necessity. We discussed a broad rane of topics regarding terrorist attach situations including the human physiological response to high pressure situations to the unique training methods employed to ideally prepare a person to address them.
We moved on to some drills, learning the proper rifle shooting position and different aspects of engaging a terrorist attacker. 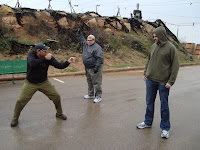 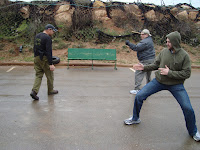 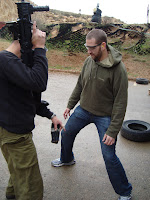 The drills were a lot of fun – running next to Itay and then on a command dropping into our shooting stances. We were discussing the importance of understanding threats at different distances when I was quickly reminded how real all of this was for mane people in Israel. Steve told us a story that about 4 years ago a terrorist with an AK-47 had entered the town of Efrat. The CGO was called and Steve’s friend was the first on the scene. His friend shot the terrorist in the soldier from a distance and immediately sprinted towards him to ensure that he was no longer a threat. As he approached the terrorist, the injured man pulled out a sword and cut Steve’s friend along the waist. Steve said the guy felt all his innards falling and he quickly fell backwards as he neutralized the terrorist. He was air lifted to a hospital and was able to make a full recovery and is still a member of the CGO. It was really impactful to hear Steve’s story – while for us this was a fun learning experience, this training is also of real life importance and helps protect people in Israel and abroad.
After practicing out shooting stance, it was on to the real thing. My dad and I had shot hand guns in the past, but neither of us had ever fired military rifles. It was a cool and different experience. We sat down and learned about the use and features of the American made M-16 and the Israeli made Tavor rifles.
﻿ 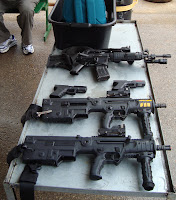 ﻿The Tavor is a relatively new weapon designed by Israel Military Industries. Unlike almost all military rifles, the Tavor’s ammunition magazine is fed into the weapon behind the handle and trigger. This drastic change in design allows the Tavor to maintain the same barrel lengths as the M-16 (barrel length largely determines accuracy) while making the silhouette of user considerably smaller – this means a person using a Tavor eposes less of their body than when using an M-16. This is ideal for urban and close combat situations. The Tavor is also intelligently designed ambidextrously. The M-16 is designed for righties. Lefties are inconvenienced in several ways. After a bullet is fired from an M-16, the shell is ejected to the right side of the gun. This means that a lefty constantly has hot shells flying at them, which occasionally find their way down the users shirt which we were told, and Itay confirmed (we are both lefties) can be uncomfortable to say the least. Additionally, the safety switch and magazine ejector on the M-16 are both designed solely for righties. The Tavor addresses all of these issues and is designed for ambidextrous use.
We took turns firing the Tavor – it was Itay’s first time using the Tavor as well. Unsurprisingly, Itay shot much better than my dad and I. 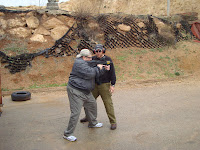 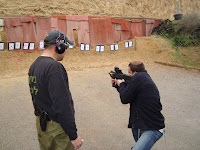 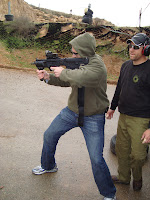 After the Tavor, we switched over to the M-16. After a run down and demonstration, we took turns firring the M-16 on automatic fire setting. Rifles are generally fired on semi-automatic – one shot per trigger pull, because the kickback on rapid fire is too strong to aim accurately. We each took a turn with firing off five rounds on automatic. The M-16 can fire about 36 founds in a minute on auto-fire. Here are the videos of my dad and I on auto. Although I sort of fall back at the end, I landed 3 of 5 on the target – the same as Steve (sorry its side ways - no way to rotate it). My dad and Itay both landed 2. My dad's video is kind of comical - take a look.


After the M-16, we fired a handgun and then sat down to do a summary talk. Our closing recap was very surprising and moving. Steve told us that in addition to working part time at Caliber 3, he runs a school for children with learning disabilities, and is studying for his rabbinate exams. It was surprising to hear that just spent the past several hours teaching and demonstrating the most advanced combat techniques was also a father of four, a director of a school for children with special needs and a rabbinical student. Steve reiterated the importance of being the best in counter terrorism and expressed the widespread sentiment that we can only hope that one day Israel won’t need these skills in order to exist. Steve closed by quoting Golda Meir – Israel’s 4th Prime Minister, and I too will close with the same quote which explains why Caliber 3, and all of Israel’s counter terrorist expertise are necessary. “We have always said that in our war with the Arabs we had a secret weapon - no alternative.” 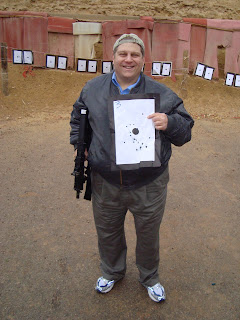 Posted by Oracle of Jerusalem at 12:03 AM