Back in New York, I had a penchant for planning beach weekends. I planned July 4th and Labor Day weekend trips for the past three years. My love of group trips to the beach has not changed. Two weekends ago 9 friends and I headed to Eilat (southernmost city in Israel on the Red Sea) for a weekend getaway. After several postponements, we finally made it happen. Finding the right priced hotel and flights was challenging. A special thanks needs to be given to Jo (friend who came on the trip), who found the best hotel deal for us.
Eilat is about a 4 hour drive from Tel Aviv and 3 hours from Jerusalem (assuming no traffic). The flight from Tel Aviv to Eilat is an hour. Most flights leave from a small domestic airport called Sde Dov, on the northern edge of the city, rather than Ben Gurion, which is about 20 minutes from the airport.
Due to varying schedules, locales and budgets, the group arrived in parts. Shimon, Nina, Ruchie and I were able to leave Thursday morning. In order to get in as much Eilat as possible, we flew down on Thursday morning at 6:30. As we deplaned, the heat immediately hit us – temperatures over the weekend reached above 40° C (104° F)! When we arrived at the Vista Hotel, we were told unsurprisingly that our rooms were not yet ready, so we checked our bags in the luggage room and went our own ways. I hopped a bus to Marina Divers at Coral Beach, to begin my two day advances scuba diving certification.
After three morning dives, including a ship wreck and a navigation dive, I headed back to the hotel. As I returned, Ben, Daniel and Ilan arrived from Jerusalem. They drove down since it didn’t make sense to drive to Tel Aviv only to then fly to Eilat – It’d take almost the same amount of time. By that time, we were able to get into our rooms. We all dropped our bags and headed to the pool, which was by no means sizable but was really fun. Daniel brought a “lay low” (British for an inflatable pool mattress) and I a Frisbee. Between those pool accessories, a floating goal that the pool had and two waterproof cameras, we were set for an unending slew of pool games and shenanigans. Flipping people off the pool mattress was a way of life all weekend. We took turns launching each other in the water and made up a bunch of goal based games initially with the Frisbee and then with the Spider Man ball that Ben bought. [To all you Rehoboth Beach trip attendees, you should know this was by complete chance – Ben bought the ball when I wasn't around. What are the odds – Spider Man balls seem to be a beach mainstay.] 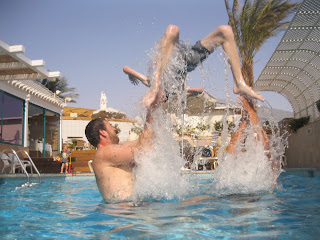 Pool Shenanigans: Natan and I Launching Jeremy (above) Three Perosn Tower (below) 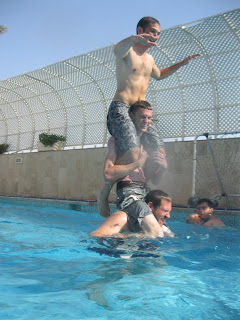 After we all showered up and changed, we met in the hotel for a few happy hour drinks before heading to dinner. Ben and Ilan own a bar and brought a nice assortment of bottles with them from their stock. We sat in the lobby drinking our own drinks, out of cups provided by the hotel staff. All weekend they were SUPER accommodating and nice to us. This is a link to my review of the hotel, which I would highly recommend for group trips. After a few pre-dinner drinks, we headed out to town for dinner at a Shipudim (skewer/barbeque) restaurant. We then walked down the main promenade stopping at bars and shops/stands along the way. We relaxed at a beach bar, sang karaoke to a very non-receptive Israeli crowd and lead by Daniel, most of us got henna tattoos, which are for some reason sold all over Eilat. I got a little baby bunny… cute. 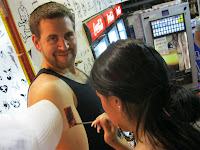 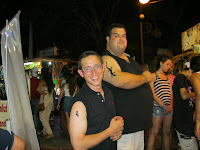 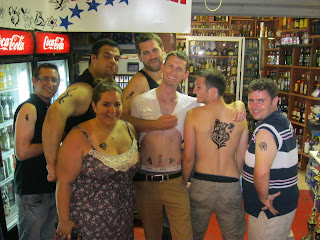 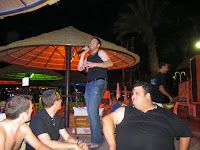 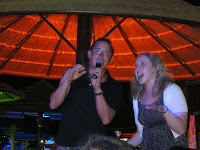 Karaoke on the beach
The next day we all met up at breakfast and shortly thereafter I headed back to the beach with Natan and Daniel for the second half of my scuba diving course. Natan and Daniel are also divers, and they went to dive the wreck I had dove the day before. Later in the day, we all dove together during the last dive of my course. The group came out to the beach for the morning and the whole group spent the afternoon around the pool.
Shabbat was remarkably relaxing. We had an excellent dinner in the hotel, shortly after which everyone went to sleep. We rendezvoused at breakfast and after service and lounging by the pool for a few hours had lunch together. The rest of the day was spent reading, playing Settlers, lounging by the pool and napping. By the time Shabbat finished, everyone was refreshed and rested.
Saturday night was mellow and enjoyable – Italian pasta dinner, beers at a beach bar and live 80’s music at the Three Monkeys. The next morning, Shimon, Jeremy and I left the airport at 6 am for a 6:40 flight back to Tel Aviv. We were all back at our respective offices by 9 am feeling like we had returned from a much longer trip. Eilat was all in all great. I’m excited to return. My next travels however will be to the United States on August 10th.
Posted by Oracle of Jerusalem at 2:58 PM