Last Thursday night, Lisa and I headed to the Old City of Jerusalem to see the Renaissance Fair that was being held in all parts of the Old City. We did not realize that the Fair was ending shortly after our arrival, so unfortunately we did not get to see everything we had hoped to. When we arrived, we saw actors on stilts performing a cute skit as dozens of kids looked on. We quickly moved on to inquire what else there was to see.
When we approached a group of “maidens” in costumes and asked them what their part was in the Fair and what they were doing, they replied very out of character that they were getting paid. Despite their lack-luster enthusiasm and breach of character, we still took a picture with them. 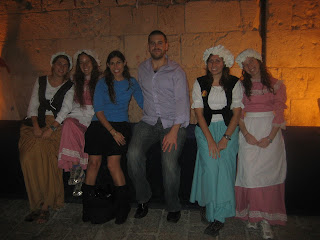 We then headed into the Old City and toured in the Christian Quarter. The Old City of Jerusalem is divided into four parts, the Muslim, Christian, Armenian and Jewish Quarters. The Renaissance Fair afforded Lisa and I an opportunity to see parts of the Old City that we had never before seen. We saw all sorts of costumed actors and enthusiasts partaking in the festivities. I could not help but notice that most of the actors were not as enthusiastic as would be expected. In retrospect, this was likely caused by the fact that we arrived to the Fair 45 minutes before it ended. At that point, the actors had probably all “had enough.” Although in retrospect it may not be fair to compare the actors to the enthusiasts. The non-actor enthusiasts were probably looking forward to this event for much longer than the actors were. I saw one man wearing metal armor - how often can he wear that when it is not the Renaissance Fair... not often - especially in Israel, where you need to go through metal detectors to go to the bus and train stations, malls and other large public buildings. Also, truth is, for those that know me well, I'd be the same way if Kenny Chesney or any American Country Music artist came to Israel - I'd be decked out in my country music getup hella quickly.
We fought through the crowds to make our way deep into the Arab Shuk (market) to see a stage where yet another performance was just ending. Lisa and I struck up conversation with some students who were studying in Jerusalem on a post-high school one year program. I was surprised and Lisa was flattered when they asked us what program we were on… just about 7 years late on that one guys. We discovered from talking with them that we had missed fire breathers, a battle royal of armored nights and what sounded like an all together fun time.
One of the highlights of my night came as it was time to go. We had just fought our way through the crowd to reach one of the main performance stages, only to discover that the performance was over and that we had to come back the way we came, this time flowing with the massive crowd through the narrow Shuk of the Old City. As we were preparing for cramped walk back, I thought of an alternate route that lead us in a completely different direction than the mass of the crowd and we were able to comfortably jaunt through the Old City and make our way back to the centre of town. I was so proud of myself for thinking of the alternate route. For a guy, that is the exact opposite of asking for directions… what a rewarding feeling. :-)
Posted by Oracle of Jerusalem at 10:08 AM