I Bleed For This Place

Today (Thursday) started off frustratingly to say the least. My work had scheduled a meeting with Greylock for 9:30 in the morning. After the meeting, I was going to attend a conference with two coworkers on Israel’s Energy Infrastructure: Present and Future. The whole start of the day sounded great. I told my Hebrew teacher that I’d be missing class and notified Boys Town Jerusalem that I would not be able to make it due to work engagements. Unfortunately last night we were notified that due to the interest expressed in the conference, our company’s four spots had been reduced to 1. Okay, still I was going to meet with Greylock, the second oldest VC funds in the world. I set out with Shimon, my roommate—7:00 am morning services and—at 7:20 to pick up his 2 carpool mates to make the quickest commute to work – a 45 minute drive to Modi’in, a city between Tel Aviv and Jerusalem. The trip took about an hour and 25 minutes to get to my office – all in all not bad.
When I got to work I had a candid conversation about the visa with my co-worker, which of course is still not resolved. A few minutes later as we are about to leave the office, we get the call from Greylock cancelling the meeting. Now I was in Tel Aviv, missing Hebrew class for nothing. I left to head back to Jerusalem and decided to go to the Ministry office again (they see visitors on Thursdays). I went home to get my passport and then headed to their office. By the time I got there, there was a pretty long line so I took a seat and waited. After about an hour wait I sat down with the foreign workers permit lady who informed me that the process was pending, my company still had not sent in one form, but she did not know which form it was that was missing because she didn’t have my file with her (as in blue folder with papers in it like all the other ones strewn across her office… and this is the country that brings us the latest semi-conductor and communications technologies.) She said that the process was not being held up and that my file was being reviewed by a committee, but that we would need to submit that form in order to have my application finished.
As you would expect, I left the Ministry pretty upset – the frustration just kept growing. I met my friend Lisa near bye for lunch. It was nice seeing her, but I could not shake the disappointment stemming from this whole mess. We walked to the bus stops to go our separate ways. Next to the bus stop, there was a portable blood donation center. In Israel blood donations are made often and in addition to holding blood drives, organizations operate mobile blood donation units that are essentially trucks that have blood donation beds. I decided it was a worthwhile stop over and I headed for the truck. After filling out the forms I climbed aboard.
I like to donate blood – I think it is important and that it is amazing that at some point some of me could end up helping/saving someone else – that is huge. Whenever I donate blood, I get very chatty and try to make it a fun experience for myself and the blood drawer. As I was waiting my turn I started making small talk with the girl who was taking peoples blood. She was a 20 year old preparing to attend university. I asked her the record bleed time of the day – 4 minutes. I vowed to beat it. When my turn came, she put the needle in and counted off a “Ready, set, go.” At “go” I turned on a song on my phone and was timing my progress. I am a pretty good bleeder, which is good for donating blood and bad if I ever get cut, stabbed or shot (G-d forbid). Although I did not break the 4 minute professional bleeder, I put up a respectable 4:30. Not too shabby considering the average is 8-10 minutes (I have mad skill). 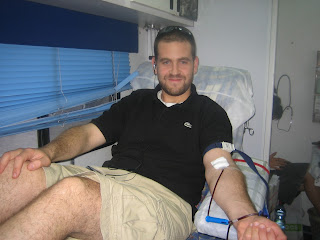 After my donation, I got a juice bag (like a box but made out of foil instead of cardboard) and a sticker. Later at the supermarket, two people gave me kudos for donating. When I walked out of the blood mobile, my mood was suddenly transformed; I was in a great mood, cheery and singing along with my country tunes. I called Lisa to tell her the good news, and she said I sounded high. I was feeling great. I think it was really caused by my forcing myself to be silly and light hearted, which I always do when I give blood – in three months I’ll be back at it, aiming for the 4 minute mark. 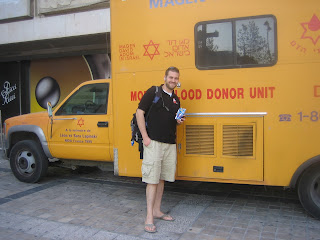 Posted by Oracle of Jerusalem at 12:29 AM