My Cool Run in Jerusalem

There is nothing quite like the feeling of running hard, as my adrenalin pumps and I suddenly get in the zone and feel like I can just keep on running. I have been getting back into running and working out and am starting to feel the results of my efforts (4.5 runs last week). So far since Friday I have run twice and played basketball.
Last night when I got home from work I really needed a run. I had a lot on my mind and came home thirsty for a run. I changed my clothes and off I went. I knew that I wanted to put down some good distance but didn’t quite know where I wanted to go. I started off on my regular path to Gan Sacher. Then, like Forrest Gump, when I got to the top of the park I just kept going. I ran up to Kraft Stadium, the field sponsored by Robert Kraft, the owner of the New England Patriots. I saw some women’s flag football games being played as I ran on. As I kept going I decided it would be cool to run over the Jerusalem Chords Bridge that goes over the entrance to the city and will one day be used by the Jerusalem light rail.
The bridge is a controversial structure – all the buildings in Jerusalem are built of the same stone, giving the city a unique and consistent ancient feel. The bridge as you can see in the picture is all white and has a very modern design. It is a work of the world renowned architect, Santiago Calatrava, who has designed many bridges as well as the City of Arts and Sciences in Valencia Spain that I visited with my sister during out Europe Trip in 2006. A special thanks to my sister Atara for teaching me just about all I know about architecture over our trip. 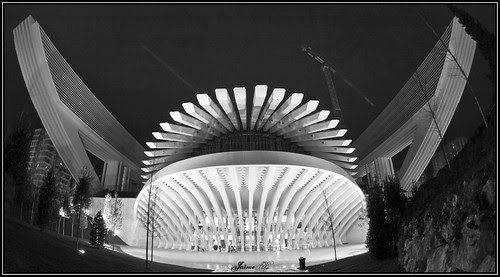 His designs are very modern, even futuristic looking and are beautiful. The pictures do not do his work justice. Fell free to check out more pics here: Santiago Calatrava Works
I personally think that the bridge is beautiful and I appreciate the stark contrast it presents to the skyline of white brick on every other building. Many Jerusalemites vehemently disagree.

As I crossed over the bridge I had a huge grin on my face and felt the return of Running Yoel. I tore down the bridge, past the central bus station and realized that I was far from home. I started to think about the different routes that I could take to go home. Somehow in my mind I made up to take one of the longest, indirect ways home. As I passed various turnoffs I considered taking them but kept on going. I ran down Yaffo Street past the shuk (market), passed the center of town and Ben Yehuda where a political rally was being held. I made a right at the David’s Citadel and ran passed down King David Street passed the YMCA and King David Hotel. I then headed past Gan Hapamon (the Bell Park) and made a right down Emek Refaim (a popular street of restaurants and cafes). I ran down Emek Refaim and then made a right on Rachel Imeinu, up the hill at the far end of Rachel Imeinu and took a left on Lamed Hey, where my run finally ended.
Now many of you might be scratching your heads now asking why I am posting an obscure list of pseudo landmarks to tell you about my run. Well last night when I got home I hooked up my Garmin watch (GPS Running watch – once you run Garmin you’ll never go back) to my computer and downloaded the run to see what it looked like on the map. I logged on to http://www.mapmyrun.com/ and I discovered possibly the coolest thing that has happened to running since the shoe lace. Please see below – the flight simulator of last night’s run.After that whole long description of the Chord Bridge, I am sorry to say that the satellite images used are old and they do not actually show the bridge. I'm sorry about that.

Also a special shout out to my most loyal reader for his continued support and inquiry into my running progress. Thanks ZZ
Posted by Oracle of Jerusalem at 10:16 AM