Last Tuesday night I was faced with a serious dilemma, go for a run or join my roommate Shimon at the Jerusalem street fair that was taking place on Emek Refaim, a popular street lined with cafes and restaurants. Expecting to be generally unimpressed, but succumbing to fatigue and appetite, I opted to skip the run and join Shimon. My decision was definitely the right one. What we saw on the street fair is hard to put into words.
Shimon had mentioned that at the last street fair there were all sorts of food vendors selling dishes that are usually hard to come by in Israel. I recalled the street fairs held in New York where two blocks of an avenue are blocked off and vendors selling socks, hats, nicks and knacks were intermingled among those selling hit dogs, smoothies, barbeque, funnel cakes and all sorts of other unhealthy but certainly delicious dishes. I was excited at the prospect of actually being able to eat the street fair delicatessens, as they would finally be kosher for once.
We met up with Jeremy and Gavin and headed onto Emek. Our first stop was the burrito booth – kosher Mexican food is unfortunately hard to come by. At the street fair I got me a burrito with everything on it. Across the way from the burrito stand, some lights and speakers were flashing and blaring as a group surrounded a hip-hop dance group. We checked them out for a bit and moved on. Things at this point of the street fair seemed normal and expected. As we progressed down the street, thing got weird quickly. We passed the singing, mime-looking clowns and the hard to describe (lots of those) performing group. 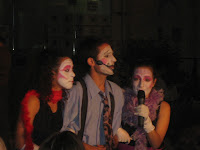 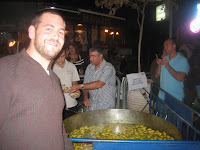 After the burrito, I was not yet full and we were ready for more fun foods. We came across a giant pot of kubbeh – a Sephardic dish of meat filled dumplings in a sour soup. It was very tasty and the pot was just awesome. The street fair was a bigger deal than I had been initially led to believe. 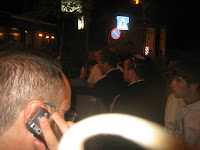 Even the Mayor of Jerusalem Nir Barkat came out. I did not get a chance to snag a picture with him, but got one while he was checking out the kubbeh – notice the two body guards with the ear pieces – there were there to protect him from the street fair crazies.
An artist had created several large statues that reminded me of pictures I have seen from Burning Man. The statues were kind of scary – large skeleton papier-mâché with cloth and material on them. At one point I looked to my right and saw these large skeletal statues and to my left I saw a miming performing group. Loud music filled the air – a mix between the brass band near the statues and the break dancing troupe’s hip-hop music, bright lights were flashing and suddenly I felt transported into a "freak out" scene of a movie - the entire environment was very tripy. 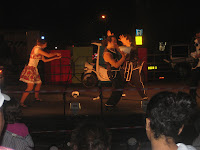 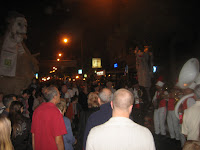 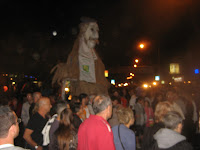 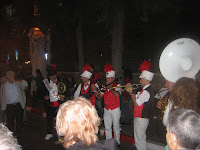 We met up with my friend Aviva and picked up some “candy floss” (Australian for cotton candy) and moved on. A guy in a full monkey suit on a unicycle biked past me screeching like a monkey. I heard later that he had climbed a tree and was screaming at people below. We then encountered a group of “performers” dressed in rags. There were acting out some sort of scene that involved them standing in a picture frame, loving a post covered in advertisements and periodically being afraid of everything. They were amusing and terrifying all at the same time. At one point they were running through the crowd and one of the performers jumps in front of Aviva, screams and steals some of her candy floss. Later, Jeremy posed with them as they were worshiping the flyer pillar – again really bizarre stuff. 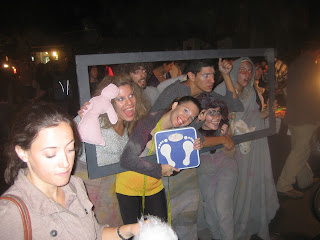 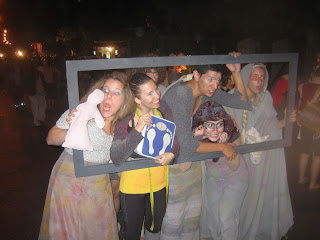 Another group of performers we saw was a group of three Israelis dressed as quintessential Israelis sitting in booths on ladders yelling at each other. The crowd seemed to love this because they clogged the road to watch and we had to squeeze through. I climbed into one of the stalls for a picture. 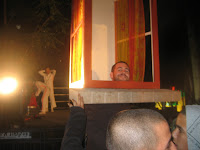 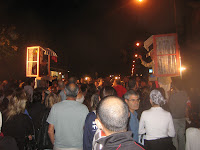 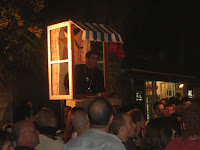 We saw a group of slapstick comedians we named the Shims perform. At one point they were pantomiming a boxing match and they needed a girl to pretend to hold a sign between the rounds in the fight. I quickly volunteered my friend Elana. As soon as she got up there, they Shims, who dressed in futuristic jump suits and mohawk wigs, told her in their hybrid English, Hebrew, Gibberish language that she should walk across the stage “making sexy” while holding her hands up to show what round of the fight was about to take place. Her first attempt at “making sexy” by dancing like she was at a barnyard ho-down was not appreciated by the Shims. Her second attempt did the trick. After her strut across the stage announcing the first round of the fight she tried to leave but they wouldn’t let her. She cleverly escaped when she announced round two and ran off the stage.
At the end of the street fair, a large group of senior citizens were dancing a dance that they knew too well – I tried to figure it out and couldn’t get it. Jeremy pointed out that they have probably been doing the same dance steps for 40 years. That made me feel better about my dancing skills. I attended a salsa class the night before the street fair with Aviva and Lisa (I know I owe a post on it too) and so Aviva and I decided to try out our dance moves in public – on the unoccupied stage next to the senior dance party. All was going well until the DJ came over to us and told us to get off the stage – apparently we weren’t good enough to be tolerated on stage.
Below are other random pictures. All in all, the street fair was complete randomness and kind of indescribable. If you have the chance to go to a Jerusalem street fair, you should definitely go for it.
WOOOO STREET FAIR 2010!!!
Posted by Oracle of Jerusalem at 2:22 PM