This year’s Thanksgiving was like none I have ever had before. Despite the fact that I am over 6,000 miles from America, the true spirit of the day ran through the entire weekend. I have never in my life celebrated Thanksgiving as thoroughly as I did when I was not actually in Israel.
On Thursday, I woke up early to study more for my Hebrew mid-term. The traffic on the way to school was one of the many reminders that the day was not a holiday in Israel. I arrived 20 minutes late and immediately began my mid-term. It went well (I hope) and I got out early. I headed to the market to buy some wine, beer and soda for the Thanksgiving feast would be attending later in the day.
When I arrived at Boy Town Jerusalem, I was especially excited for class. On Tuesdays I teach 7th graders that are behind in their English studies. They are just starting to piece together words having just completed learning the ABCs over the past two months.
On Thursdays I teach the 11th and 12th graders. Teaching the older students is more fun – they have more personality and have an English base on which to stand. Usually, we go over sections of their Bagrut (Israel’s Regent or high school matriculation exam) practice books. We read stories about space junk, book sales and travel clubs and then answer questions the passages. On Thursday I decided to mix things up in honor of the holiday. On Wednesday before I left the office I ran off some copies of Wikipedia’s Thanksgiving and Black Friday as well as two Black Friday advertisements to give the students a taste of what the greatest weekend in America is like.
When I mentioned to one of the 11th grade teachers that I was going to teach my students about Thanksgiving he was surprised and concerned. I explained to him that Thanksgiving is not a Christian holiday, but is rather a great day for all to celebrate. When we started class, I soon came to realize the major error in my preparations. I should have spent the time looking for an easier passage that would be more understandable to my class. Unfortunately we had to make due with what we had. Reading through the Wikipedia articles gave me the chance to practice my Hebrew more than usual since I had to explain large sections of the passages. Nonetheless, the students enjoyed learning about Thanksgiving and at the end of class they said they like learning about America. One noted that he now had something to speak to Americans about. After the 11th grade class, I was excited for the 12th graders. They have the strongest grasp on English and I was sure they would understand more of the print outs. Before class I began editing the articles – crossing out sections that were unimportant or too difficult. 15 minutes after class was to begin, another English teacher came into the class room and informed me that the 12th graders had taken a 3 hour exam for the air force to determine their qualifications for certain engineering units earlier in the day, and that the students had been sent home after the test.
On the one hand, I was happy because I now had time to go home and change and make it to Thanksgiving dinner on time, on the other hand, I was disappointed that I would not get to share with my students my enthusiasm for Thanksgiving. I decided that although it would be twelve months away, Thanksgiving will still be pertinent next week, and I’m excited to teach my 12th graders all about Turkey Day soon.
After school, I headed with my friend Aviva to her friend’s home for Thanksgiving Dinner Round 1. It was amazing. When we arrived, the hosts already had the Thanksgiving Day Parade streaming through the internet and we sat around watching the parade sipping whiskey sours, a family tradition of one of the dinner attendants. The meal was absolutely amazing – the turkey named Carl was cooked to perfection and the pumpkin pie, sweet potatoes and cranberry crunch were all amazing. We went around the room sharing what we were thankful for and regaling each other with great Thanksgiving stories. To keep with my families tradition, I roasted chestnuts (not on an open fire though L) and many people had chestnuts for their first times. The meal was an absolutely great time.
After dinner we Aviva and I went to town and met up with our friends Rivka and Lisa. They had just come from another Thanksgiving feast that enthusiastically celebrated the holiday to the point that they had prepared themed hats for the meal. We wore the hats out in town and got a great range of responses. Americans enthusiastically wished up Happy Thanksgivings and Israelis rudely remarked that it was not Purim (a Jewish holiday on which people dress up in costume). 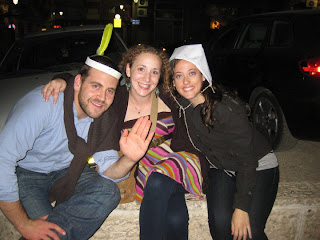 The following day, I attended Thanksgiving Shabbat dinner at my friend Josh’s. Both the company and the feast were amazing. The turkey was again awesome and there was stuffing, gravy, cranberry sauce, sweet potatoes, pumpkin pie, the whole nine yards. Gideon, the token British guy at the meal decided to get very into the celebration of the holiday and brought song sheets that he said had “classic American Thanksgiving songs.” The song Albuquerque Turkey was his personal favorite – it came complete with a dance that he taught to the table and then made everyone sing and dance along. I have suspicions that he made the song up to “have a good piss at the expense of the Yankees.” The second dinner was also very authentic and a great time, but I still wasn't done yet.
I have a lot of cousins from the US studying in Israel this year. It just so happened that several of them were in Jerusalem this weekend, so my sister had us for lunch and made a sumptuous Thanksgiving themed lunch, again I ate turkey, sweet potato pie, apple cranberry crunch, etc. It was nice catching up with the family and my sister made a beautiful meal.
When all was said and done, I did not feel Thanksgiving-ed out. I found that the more meals I attended that we went around the table saying what we were thankful for, the more introspective and appreciative I became. I am really thank G-d very blessed and fortunate and I often try to remind myself of that fact and need to continue to do so.
Posted by Oracle of Jerusalem at 12:31 AM